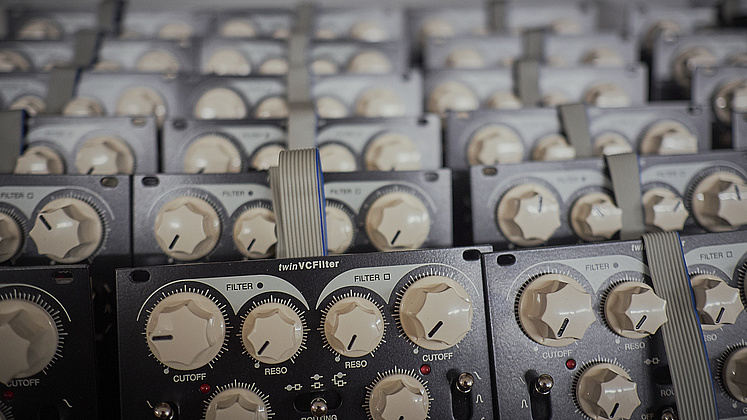 At this year’s Winter-NAMM we presented a couple of new eurorack-modules. twinVCFilter will be the first one of these that will be available at the end of March. Shortly after, its extension module tVCFEXTENSION will be released as well.
We think it’s a good time to give you some detailed information about the new kid in filter-town.

The filter-module has two identical sections A and B (on the front panel symbolised by a circle and a square). Each can work as lowpass, bandpass (12 dB/octave) or bandpass (6 dB/octave).

The twinVCFilters circuits are based on the filter sections of Retroverb Lancet, Filter Lancet respectively Action Filter 4.

Input signals can be routed in three different ways through the filter sections A and B:

Each filter has two CV inputs for modulating the cutoff-frequency - one with and one without attenuator.

With a LINK switch you can link cutoff- and resonance controls of both filter sections. That’s great for stereo use in dual mode or for getting filter-types with doubled slope in serial mode.

In addition to each filters output, there is a mix section. Here you can seamlessly blend from the output of filter section A to filter section B - manually or by using external control-voltages.

twinVCFilter is a most flexibly filter module. Thanks to its various routing- and control-possibilities it is predestined to be your modular system’s first filter as well as a great choice to add some new flavour to existing filter modules.

twinVCFilter is also a fantastic sound-generator. We especially designed the resonance to be reliable and musically. You even can use twinVCFilter as stable sine-LFO!

As if that wasn’t enough, we made an extension-module to expand the vast feature-set of twinVCFilter. tVCFEXTENSION offers individual outputs for each filter type of both sections and adds notch outputs as well.

We included two polarizers, allowing to attenuate and invert any kind of cv-signal. And at the push of a button you can route them to the cutoff-frequencies of section A and B. They can also produce a voltage on their own which gives you the opportunity to modulate cutoff-frequencies of both filters in parallel or contrary with any desired offset.

tVCFEXTENSION is a gorgeous way to get even more out of twinVCFilter. Best: You can choose yourself if or when you need these additional features.

We are looking forward to next month and just can’t wait to get your reactions to twinVCFilter!