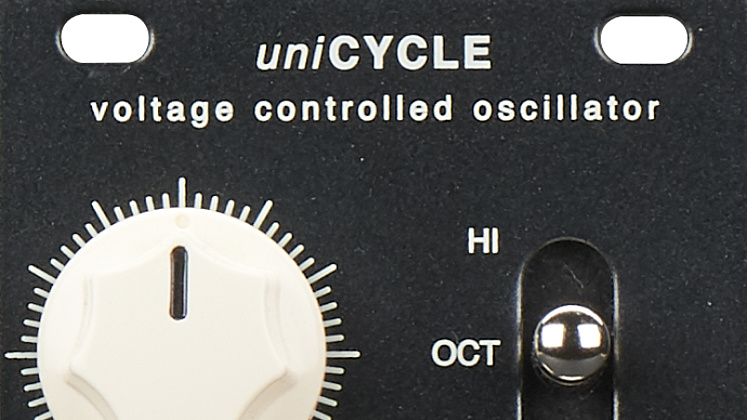 A while ago we gave one of our Modular Case 104, fully assembled with VERMONA modules to our dear friend xtront for having some fun with it. As a result, we have a bunch of audio files on our hard-disc now that we'd like to share with you now and then.

Like with the subtractive synthesis we think an oscillator is a good starting point. In the VERMONA eurorack world this means uniCYCLE. It is a quite small module, at least to our standards, but it is packed with features and a dead-simple user interface. It offers a total of six waveforms, three of them with variable symmetry. In this article, we'd like to concentrate on the naked waves.

The base for everything: a pure sine-wave. All of uniCYCLE’s waveforms including the sine-wave are generated entirely analog.

Next is the triangle-wave with a little bit more harmonics. Compared to the sine it sounds more aggressive but still without being harsh. Great foundation or support for basslines.

The sawtooth is the richest waveform. The one that comes out of uniCYCLE is quite fat. Two of these sawteeth with a little detuning will let you Jump for joy.

Of course, the most famous representative of its kind is the square. The pulse-width-modulation on uniCYCLE’s square can go beyond the point where it is audible. With an LFO connected to the PWM jack, you can get impressive rhythmical effects.

Even - what is this? While the square wave has only odd harmonics, even has the base frequency plus even harmonics - that's where the name comes from. It can be morphed to a sine-wave by turning the pulse-width controller.

The double-saw oscillates one octave above all other waveforms and can be transformed to a triangle with half frequency by using pulse-width.

xtront also made beautiful sync-sounds and some ring-modulated sounds using a quadroPOL. You can check them out on the dedicated demo-section of the uniCYCLE product page. Enjoy listening and exploring.